What is a school Facility Team?

Project Paws Facility Teams consist of a school staff member partnered with their trained and registered therapy dog. To become a registered team, the staff member (handler) and the dog are required to demonstrate an ability to work safely and effectively together. Therapy animals are privately owned and registered with an established therapy animal organization.  All Lyme- Old Lyme Public School Facility Teams have been evaluated and registered with, Pet Partners, a leading therapy animal organization.  Staff members are principals, counselors, psychologists, teachers, and athletic directors. The goal of providing these partnerships within schools is to support overall mental health and social-emotional learning in youth. 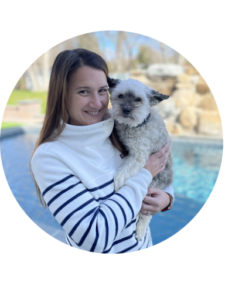 Jeter and his mom, Deb Spera, are one of the newest Project Paws Facility Teams in the Lyme- Old Lyme schools. While HER namesake was given based on the Hall of Fame shortstop for the New York Yankees, Jeter the Schnoodle (Schnauzer/Poodle) has become an all-star at the Lyme Consolidated School. And yes, Jeter is a female dog.

Jeter and Mrs. Spera can be found daily in the classrooms bringing joy to students and staff and privately with students in the school psychologist's office. Although Jeter is the smallest Project Paws canine weighing in at 9.8 pounds, she shows an enormous amount of love to the students and staff on a daily basis. Jeter’s All-Star versatility ranges from the laps of staff members or students to the large crowds that pet her endlessly with her hypoallergenic hair. Jeter really knows how to hit a home run when a student is having a difficult day. Her calm, loving demeanor can turn any frown upside down. Although she may look like a puppy, Jeter is a veteran in the clubhouse at the age of 12 with puppy-like energy at times.  She loves to play with her siblings, Rocco and Nico, and her newest doggy companion, Yogi (4 months old), who is in the minor league system waiting to join the Project Paws team in a few years. 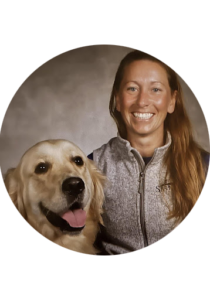 Kona and his mom, Hilde Heck, are a Project Paws Facility Team working together within Lyme-Old Lyme High School. Kona is a big bear who brings smiles to everyone he comes in contact with. A three-year-old golden retriever with a talent for sharing love and affection; Kona’s gift of brightening a room is nothing short of spectacular. While he loves giving affection, don't be fooled, he loves belly rubs! Kona’s hobbies and interests include baseballs, snowballs, swimming at the beach, hikes with mom and Dad, Chris, and his four-legged brother, Skylar. 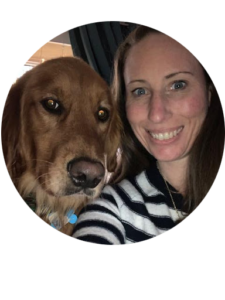 Brody and his mom, Katie Melia, are a Project Paws Facility Team working together within the Lyme-Old Lyme Middle School. Mrs. Melia decided to complete therapy dog training with Brody because it seemed to be Brody's calling! Brody has a wonderful temperament and provides essential lap support; he is a compassionate listener and offers genuine acceptance. ​​Brody adores being around other people and would happily spend his day getting never-ending pets.  School visits are his favorite part of the week. 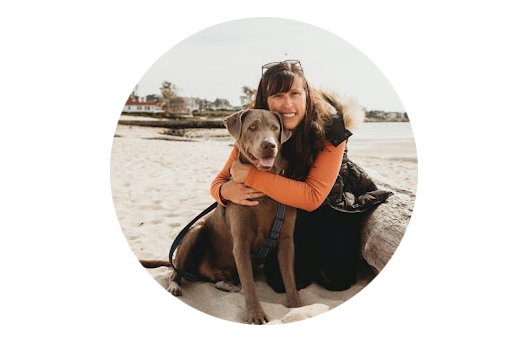 Blu and his mom, Renee Molnar, are a Facility Team working within the Lyme-Old Lyme Middle School. Mrs. Molnar is a School Counselor. Blu can be found lounging on Mrs. Molnar’s office couch, cuddled up with a student, or searching for a treat in the main office! He is enjoyed by students and staff and the jingle of his collar or the sound of Blu’s paws on the tiled floors can brighten anyone’s day. Blu is a compassionate listener who has been known to turn a student’s day around just by sharing his paw-sitive energy.  Blu enjoys hiking, boating, skiing, and walking on weekends with Mrs. Molnar, her husband, and their twin 16-year-old daughters.

Mrs. Molnar is also a member of the Project Paws Board.  Click on 'Meet the Board' to learn more. 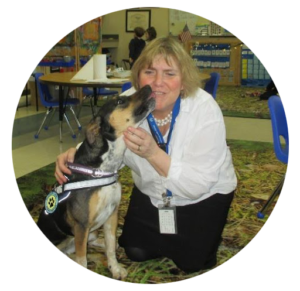 Zoey and her partner, Rebecca Bocian, are a Project Paws Facility Team working together within the Lyme-Old Lyme Preschool. Zoey is a very special dog, a Tripawd (amputee with three legs), rescued by Dawn McCarthy and her family. Zoey lives with the McCarthy Family but was able to train with Mrs. Bocian to become a therapy team. Zoey works with Mrs. Bocian in her integrated special needs classroom of 15 four and five-year old’s. Zoey has taught the students kindness, patience, and acceptance. She has helped students overcome feelings of anxiety and she is a non-judgmental listener who provides comfort to new readers. Zoey is always up for being pet by the students, she can perform dance moves and roll over on command. Zoey is amazing! 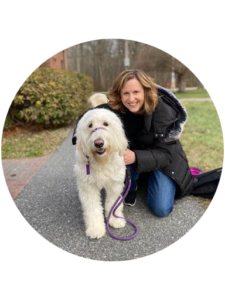 Isla and her mom, Kelly, are a Facility Team working within Old Lyme’s Mile Creek Elementary School. Isla is a gentle and loving girl who is happiest when being pet and admired by others. She makes sure to give attention to anyone in need of a little love, bringing smiles to the faces of students and staff.  She enjoys recess, visiting students in and out of classrooms, and greeting students as they arrive at school. As children shower Isla with pets and hugs, she looks to be smiling as she wags her tail with delight. Isla is a two-year-old Goldendoodle who adores her days at school and is a natural at nurturing her human friends!