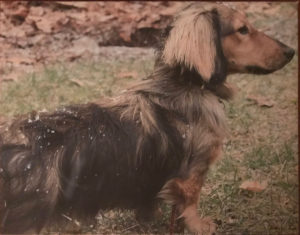 The unbreakable bond between a boy and his dog became the catalyst for Project Paws.

In the summer of 2012, Tim was attending a therapeutic wilderness program in the Blue Ridge Mountains, attempting to create change for his mind, body and spirit. During Tim’s absence, a miniature dachshund found his way into our home and our hearts. We chose the name Tip, short for Timothy Patrick. Tip became a lifeline, a beacon of hope during a tumultuous time. When Tim was finally able to come home and meet his new friend, their connection was immediate.

The unbreakable bond between a boy and his dog became the catalyst for Project Paws. In hindsight, I realized the therapeutic impact that was offered through their relationship, as Tip provided Tim with unconditional love and acceptance. In thinking back on Tim’s younger years, I felt certain that a therapy dog would have been of great service in assisting Tim with his anxiety, ADHD and sensory processing.

While beginning to research animal assisted therapy, I began to see the endless opportunities for animals to helps humans heal. It seemed only fitting that The Tim Buckley Project’s first program be Project Paws, celebrating the bonds of human-animal interaction, and building connection and belonging in youth.

About the Author: The Tim Buckley Project